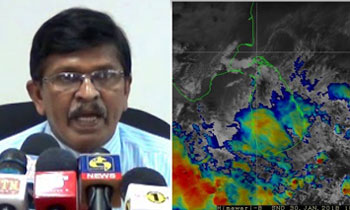 Heavy showers with thunder will experience today and tomorrow in most parts of the country as a result of the low level atmospheric disturbance over vicinity of Sri Lanka which is in its peak, Meteorology Department Director General K.H.M.S. Premalal said.

Speaking to the Daily Mirror he said starting tomorrow the weather  condition   will improve.  However he said the country will have impact of North-East Monsoon until February 5.

Mr. Premalal said the period between January and February will be free of storms  in the bay of  Bengal and it could expect fair weather thereafter.

Accordingly he said heavy falls about 150mm could be expected at some places in the Uva, Central and Sabaragamuwa provinces and in Ampara, Batticaloa and Polonnaruwa Districts.

He said heavy falls around 100mm could also be expected at some places in the Southern and Western provinces.

Meanwhile the Meteorology Department said there could be temporary localized strong winds during thundershowers and requested the public to take adequate precautions to minimize damages caused by lightning activity.

According to the Meteorology during the day ended 5.30pm today the recorded highest rainfall 61.1 mm was received  in Nuwara Eliya.