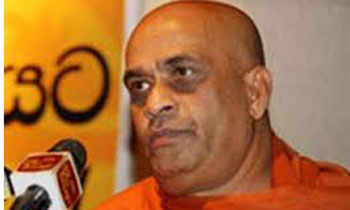 Indian premier Narendra Modi addressing just one ethnicity during his visit was a slight to the majority Buddhist population in the country, the National Joint Committee (NJC) said today.

Member of the committee Ven. Elle Gunawansa Thera said they had no issues with the Indian government or its Prime Minister. “We do have an issue with the Sri Lankan government,” the Thera said.

The government sometimes moves towards India, sometimes towards China or America. “We would like to remind the government that this is a country and not something that can be auctioned to other countries or parties,” the Thera said.

The citizens have a responsibility to protect the country and its assets, the Thera explained. “People can come here as they want but they cannot sell or break any part of the country as they please,” the Thera said.

The ETCA would lead to unemployment not just among the Sinhalese but also among the Estate tamil population, the Thera explained.

“Tamil is also an official language in the country now. We were never against this. The move made by the Prime Minister will only destroy the reconciliation fought for by the people,” the Thera said.

The government had a responsibility to protect the independence and sovereignty of the country, therefore the government should publicize the agreements signed with India. “Hiding these agreements leads us to believe that they are not advantageous to the country,” the Thera said.

Politicians will gamble at the expense of the country, but if they were to lose the bet it would be the citizens who would have to bear the brunt of the cost, the Thera said. (Thilanka Kanakarathna)