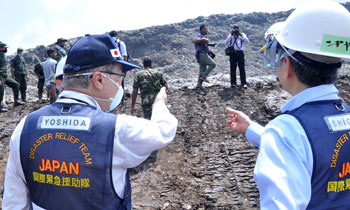 Visiting Japanese research experts yesterday warned of a methane gas explosion caused under pressure from within the Meethotamulla garbage mountain at any moment and result in more lives being lost.

A member of the Japanese Scientific Research Team which arrived in the country on Thursday made their first field inspection tour of the garbage dump last morning and urged authorities to evacuate the residents in the vicinity.

Initial tests by the researchers showed the environment to be highly polluted and while there was no methane gas released from the upper area of the garbage dump, there were pockets of gas trapped inside the mountain.

They said at least 16 per cent of the air pockets contained methane gas and this could be lethal when compared with a maximum of 1.5 percent at a normal level.

The scientists also advised the backhoes taken to the top of the mountain be brought down immediately, because the methane gas could cause the machines to explode making matters even worse.

They said a report would be compiled as soon as investigations were completed. (Yoshitha Perera)