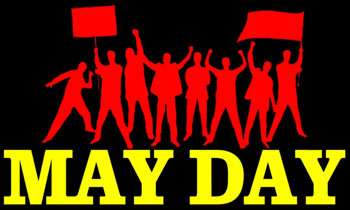 May Day in Sri Lanka will be celebrated on three different days this year with trade unions and political parties planning to celebrate it on May 1, May 6 and May 7.

The UNP has already announced that it would hold its May Day rally on May 6 at Sugathadasa Stadium while the joint opposition is to have its rally in Galle on May 7. Some trade unions including the Ceylon Mercantile Workers Union have said they would celebrate it on May 1.

Meanwhile, trade unions are up in arms over yesterday’s gazette notification issued by Home Affairs Minister Wajira Abeywardene to cancel the May Day holiday on May 1.

The Government Information Departmentsaid the subject Minister issued the gazette notification as per the powers given to him under the Holiday Act 29 of 1971 and that May 7 will be declared a public and Bank holiday instead.

The statement also requested the private sector to declare a holiday on May 7.

Ceylon Mercantile Workers Union Deputy General Secretary S. Nadesan said his union was planning to file legal action against the move on the basis that shifting the May Day from May 1 to May 7 violates the constitution.

“Constitution clearly guarantees the right of assembling and expressing. This right is guaranteed for workers as well,” he said.

Besides he said the most venerable Maha Nayaka Theras did not issue any statement asking for the postponement of May Day though the government decided on it.

Inter-Company Employees Union President Wasantha Samarasinghe said the government has no right to cancel the public and bank holiday on May 1.

“Having May Day processions and rallies on May 7 is acceptable but we cannot agree with the cancellation of the holiday. The right to stay away from work on May 1 was a right which was won by the workers all over the world for themselves and not a right granted by the Sri Lankan government to the Sri Lankan people,” Mr. Samarasinghe said.

He said his union would decide on the action it intends taking action against the change in the May Day holiday. (Yohan Perera)