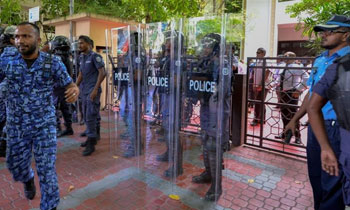 The Maldivian army has locked down the country’s parliament after the opposition vowed to move ahead with a vote against a key ally of President Abdulla Yameen, Al Jazeera news reported a short while ago.

The opposition, which gained a parliamentary majority after several government lawmakers defected earlier this month, was planning to hold a no-confidence motion against Speaker Abdulla Maseeh on Monday before the lockdown was forced into effect.

They accuse Maseeh of ignoring allegations of corruption, mismanagement and rights abuses.

The ruling party, however, declared the motion invalid after Yameen announced that four of the defectors had lost their parliamentary seats.

Ahmed Mahloof, an opposition lawmaker, said soldiers carrying batons followed the MPs inside the parliament house and forcibly ejected them.

“Soldiers in riot gear are dragging elected members out from the parliament,” Mahloof told Al Jazeera.

“This is clearly unconstitutional. Many of us have been injured.”

Videos posted on social media show soldiers pushing lawmakers out of the building. A few politicians appear to have been injured.

“There is no better symbol of Yameen’s dictatorship than the image of his security forces barring elected MPs from parliament. This president has lost all legitimacy and credibility,” said Eva Abdulla, an opposition lawmaker from the Maldivian Democratic Party.

Yameen has arrested or forced into exile most of the opponents who might have challenged him in next year’s presidential elections.

The embattled president now faces a coalition of four opposition parties, led by his brother Maumoon Abdul Gayoom, who ruled the Maldives with an iron fist for 30 years, and Mohamed Nasheed, the country’s first democratically elected president.

Faris Maumoon, Yameen’s nephew and the leader of the effort to impeach the speaker, was arrested on charges of bribery last week.

Two other lawmakers were put on trial on charges of bribery and terrorism.