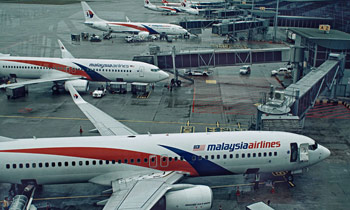 The 25-year-old Sri Lankan who was accused of threatening to blow up a Malaysia Airlines flight en route to Kuala Lumpur has failed to appear in court as he felt unsafe, International Business Times reported today quoting the lawyer of the accused.

Manodh Marks, a Sri Lankan living in Australia on a student visa, has been charged at the Magistrate’s Court in Melbourne with endangering the safety of an aircraft and making false threats. Both charges carry a maximum sentence of 10 years imprisonment.

The MH128 flight carrying over 330 passengers was forced to turn back to Melbourne just a few minutes after it took off when Marks tried to enter the cockpit. He had also threatened passengers with a device, claiming it to be explosives.

It was initially thought that Marks was carrying explosives, and the police had termed the incident on the plane as an act of terrorism. However, it was later revealed that Marks was just carrying a “speaker-type” object, authorities said.

Marks had been in custody but his lawyer has said he felt “vulnerable” in detention and asked for medical help.

“He has concerns for his safety in custody. He needs to see a mental health nurse urgently,” his lawyer Tess Dunsford said after being questioned by Magistrate Susie Cameron over the reason for his helplessness.

Marks has a history of psychiatric illness and had just been released from a psychiatric facility, before he boarded the flight, police said.

No bail request has been filed on Mark’s behalf. The matter has been listed for a committal hearing on 24 August.

Meanwhile, authorities handling the case were facing pressure with questions being raised about the time it took to arrest Marks after the plane landed at Melbourne airport.

Armed policemen kept passengers and crew members waiting for 90 minutes before they helped them deboard.

Victoria Police chief commissioner Graham Ashton said police had initially thought it was a terrorism incident and tried to handle it accordingly, before deciding it was “a case involving a mental health issue”.

“I certainly appreciate when you are on a plane in that situation one minute could seem like an hour. The objective in any serious incident like this is to get every member of the crew, every passenger off the plane safely, and that is what was able to be achieved,” he added.