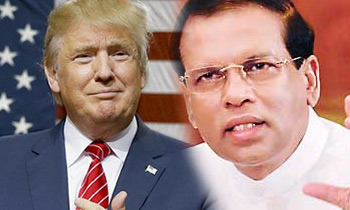 Congratulating American President Donald Trump as the United States celebrates its 241st Independence Day, President Maithripala Sirisena said he was confident that under the leadership of Trump, the Sri Lanka – United States Partnership will receive further impetus based on the commitment of both countries to democratic values and mutually beneficial vibrant trade and business relations.

The President also said relations between the two countries had reached a high point and corporation had solidified in both bilateral and multilateral spheres.

Following is the message by President Maithripala Sirisena congratulatory letter to the US on its Independence Day.

His Excellency Donald J. Trump
President of the United States of America

Relations between our two countries are almost as old as the American Republic itself, dating back to the time that the American Constitution was adopted. Our peoples have been at the forefront in strengthening our bonds. With the establishment of formal diplomatic relations in 1948 and ensuing political and commercial engagements, the longstanding ties between Sri Lanka and the United States continued to flourish and gain greater momentum.

Today, especially after the election of the national unity government in Sri Lanka, that I lead, relations between the United States and Sri Lanka have reached a high point, with solidified cooperation in both bilateral and multilateral spheres.

I am confident that under your able leadership, the Sri Lanka – United States Partnership will receive further impetus based on our common commitment to democratic values and mutually beneficial vibrant trade and business relations.

Please accept, Excellency, my best wishes for your happiness and well being and for the continued progress and prosperity of the people of the United States of America.