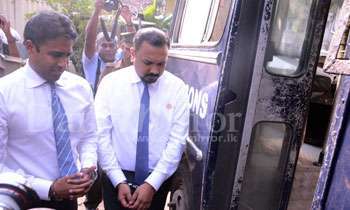 Fort Magistrate Lanka Jayaratne yesterday sternly warned the Prison Authority Officers to provide necessary attention to the suspects, who were brought to be produced before the court, as there was a complaint that suspects Arjun Aloysius and Kasun Palisena had not received lunch or water till their case was taken up.

At the end of the Magisterial Inquiry into the bond issue, the Counsel who appeared for Arjun Aloysius and Kasun Palisena informed the Fort Magistrate that their clients had not received their mid-day meals or water for the entire day, while they were at the courthouse.
The Counsel said the suspects were brought into the Court House in the morning despite the case being taken up in the afternoon.

When questioned by the Magistrate, both suspects said they received breakfast at 6.00 a.m. and were brought to the court with other suspects in the morning and since then they did not receive lunch or water till the case was taken up at 1.40 p.m.

Fort Magistrate Lanka Jayaratne was seemingly unhappy about the incident and called all the suspects, who were inside the court cell at the time and inquired about it.

However, when a senior officer of the Prisons Department was questioned by the Magistrate, he said that meal packets were already given to other suspects. However, the meals for Arjun and Palisena arrived after the bond case had been taken up.

“Therefore the other suspects were given the meals, except Aloysius and Palisena,” he said.

Subsequently, Fort Magistrate observing the importance of providing the basic human needs even to a suspect, sternly warned the Prisons Department Officers to prevent such incidents happening again, as it was inappropriate and unacceptable and directed to provide the suspects with meals immediately. (Shehan Chamika Silva)