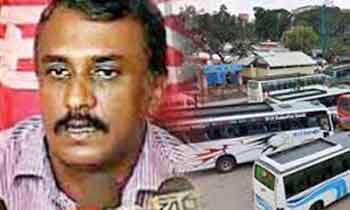 The Lanka Private Bus Owners’ Association (LPBOA) would also said that it would launch a strike if the Cabinet approved bus fare increment was not revised, LPBOA President Gemunu Wijeratne said.

He said that 6.56 per cent bus fare increment was not acceptable and it was suspicious how the authorities arrived at the figure.

“If the authorities did not re-consider the bus fare increment against the recent fuel hike the LPBOA would have to go for a strike action from midnight tomorrow as well,” he said.
“The strike would also affect bus services in the North and the east of the country as well,” he said. (Chaturanga Samarawickrama)