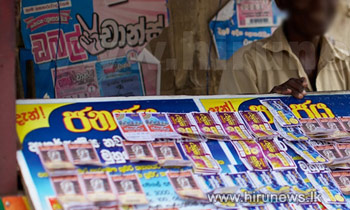 All Island Lottery Dealers ‘Association (AILDA) would boycott selling lottery tickets for five days from tomorrow (16) as their demands were not met as promised by the President, the Daily Mirror learns.

Finance Minister Ravi Karunanayake also strongly maintains that the new price of Rs.30 would not be changed at any cost.

Speaking to the Daily Mirror Finance Minister Ravi Karunanayake said that the government was not in a position to fulfill these demands and the prices or the commissions that they anticipate to be amended would remain unchanged at all circumstances.

However, the association President Krishan Marambe said the government had not yet responded to their demands as promised.

The lottery ticket dealers protested since the latter part of last year over the price increase which was proposed in the budget 2017.

This came in the wake of the Finance Ministry decision to amend the lottery ticket price to be increased from Rs. 20 to Rs.30 with effect from January 01.

However, the lottery ticket dealers demonstrated against the price hike demanding that their livelihood would get affected if their commissions were reduced as a result of the price hike.

The protest which lasted over one week was called off on January 5 following an assurance given by President Maithripala Sirisena that he would immediately look in to the matter.

“We called off our protest due to the promise made by the President that he would personally look into the matter. We can’t sell tickets at the new price. Our sales have come down by 40 percent. We cannot trust the government or the Lottery Board any further. So, we would boycott till 20 January.

“This is our livelihood. We had given enough time to solve the matter. It is not fair to risk our sales to cover the boards’ (NLB and DLB) expenses. Boards are earning millions of profits over our sweat and blood. In return what is left for us? It is Just our day-to-day income. Now the Board is robbing even that,” Krishan said.

Commenting on the issue National Development Board’s Chairperson Shyamila Perera told the Daily Mirror that she wasn’t aware about the protest and somehow the Board had given an appointment today to speak on the matter with few members of the Sellers’ Association.

“I’m not aware about this protest. We had received 530 new applications for dealerships and out of that we recruited 280. Therefore we are totally prepared for this and we don’t expect a huge impact on the Board’s sales as a result of their protest,” she said.

Development Lottery Board also had appointed 10 vehicles in the lottery distribution process within the Colombo and suburb areas avoiding a drop in sales, an official said.

“Through the discussions we had with the people and the sellers, we have learnt that the sales had affected to some extent as most of the people have reduced the number of lottery tickets they purchase,” she said. (Thilanka Kanakarathna)