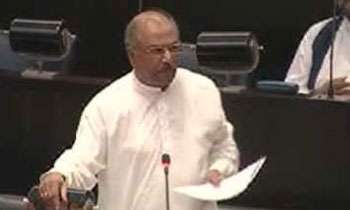 Joint Opposition MP Dinesh Gunawardane yesterday charged that local industries were in crisis due to the government’s policy of favouring foreign industrialists and asked what action the government would take to protect local small and medium-scale entrepreneurs.

He told parliament that medium and small-scale industries were in grave crisis due to the increase in the loan interest rates, the rupee depreciation against the dollar and new taxes imposed under the new Inland Revenue Act.

“The cost of doing business here has gone up due to the increase in lending rates. Tax concessions given to industries under the 2006-10 Inland Revenue Act has been removed. New taxes have been imposed under the new Inland Revenue Act introduced in 2017 and by amending the VAT and Cess charges,” he said.

Mr. Gunawardane said the local industries were at risk because of the government’s lax policy on imports and allowing an influx of foreign products into the country by way of free trade agreements.

He said that production costs had also gone up due to the high cost of imported raw materials as a result of the value of the rupee falling against the dollar.

He pointed out that a number of local industries had already been taken over by foreign companies and added that thousands of local entrepreneurs were at risk of losing their livelihoods as a result.

Industry and Commerce Minister Rishard Bathiudeen said that he did not agree with the views expressed by the MP and pointed out that his ministry had not received any complaints on such matters.

The minister said no new taxes had been introduced under the new Inland Revenue Act and added that the port and civil aviation tax had also been removed for some industries.