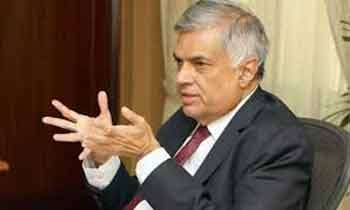 Prime Minister Ranil Wickremesinghe had told a group of Ministers and economic experts that Sri Lanka should enhance its economic and trade ties with Japan as a precaution for the ongoing economic crisis.

Prime Minister had expressed these sentiments at a meeting he had with a group of Ministers and experts on the current economic situation prior to his departure to Norway.

He has told the Ministers and experts that Sri Lanka should enhance its economic and trade ties with Japan as that country was the only country, which has managed to maintain its currency to some extent in the wake of devaluation as a result of strengthening the dollar.

The Prime Minister has said that Sri Lanka should try to attract more investments from Japan.

Meanwhile, Minister Lakshman Kiriella said that Sri Lanka had taken timely action to get Japanese assistance for the development of Kandy.

He has said more investments would come in from Japan as a result.

One of the main projects that have been lined up is converting Bogambara Prison as a tourist centre and the expanding of the Kandy City limits up to Kundasale. (Yohan Perera)