Senior lawyer Kalyananda Tiranagama, in an email interview with The , challenged the creation of six new local authorities in Nuwara Eliya. Following are excerpts of the interview done with Tiranagama.

QThere is legal wrangling about the creation of new local bodies in the upcountry. What is the legality involved in this case?

The Election Commission called for nominations for 6 new Pradesiya Sabhas to be created by the Govt. Gazette No. 2043/57 dated November 2, 2017 published by the Minister of Provincial Councils and Local Government Faiszer Musthapha.

It is not only the area around the entry point to Sri Pada that will come under a new Pradesiya Sabhawa. The whole area other than the Peak where the Footprint is situated will come under the control of non-Buddhists

It is legally impossible. The Election Commission can call for nominations only after the new Pradesiya Sabhas come into being. I do not think the Commission has given its mind to this issue. I raised this matter in the Supreme Court. However the Commission was not there to answer this. 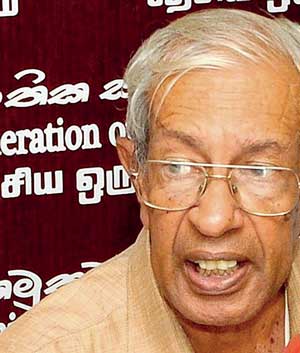 QThere is controversy surrounding the move to bring the area around the entry point to Sri Pada under the new Pradesiya Sabha. How do you see it?

It is not only the area around the entry point to Sri Pada that will come under a new Pradesiya Sabhawa. The whole area other than the Peak where the Footprint is situated will come under the control of non-Buddhists. Seetha Gangula and Indikatu Pana are two important points that pilgrims pass on their way to the peak. Pilgrims perform various rituals at these points while climbing the mountain. Seetha Gangula and Indikatu Pana are situated in the Grama Niladhari divisions of Seetha Gangula and Murray. Both these Grama Niladhari Divisions are completely situated within the Maskeliya Pradesiya Sabha area.

Sri Pada is one of the three most important, sacred places of Buddhist worship, the other two being the Temple of the Tooth in Kandy and Sri Maha Bodhiya in Anuradhapura. Sri Pada remained within Ambagamuwa Korale for well over thousand years according to historical records. The Ambagamuwa Rock inscription dates back to Polonnaruwa period, established by King Nissankamalla. It was a world-renowned place of Buddhist worship, attracting foreign visitors to the country from ancient times.

The Sri Pada season commences with the Full Moon Poya in December each year. The season continues for five months and concludes with the Wesak full moon day, the following year. During the season every year over one million pilgrims visit Sri Pada. It was reported in the papers that on the Full Moon Day in March 2016, vehicles of pilgrims visiting Sri Pada remained parked along the Nallathanni- Maskeliya – Ginigathhena Road. One can understand the number of pilgrims visiting Sri Pada on a full moon poya day.

It is the Pradesiya Sabha that provides necessary facilities for the pilgrims visiting Sri Pada day and night continuously during the season. It is the Pradesiya Sabha that grants construction permits for constructing buildings, issues licenses for hotels and restaurants, provides health services and organizes parking facilities. This generates huge income and job opportunities. When all these services are placed in the control of non-Buddhists who are not conversant with Buddhist culture and practices, one can imagine what may happen.

Under Article 9 of the Constitution the Republic of Sri Lanka the Government is bound to give foremost place to Buddhism and it is the duty of the State to protect and foster the Buddha Sasana.

Buddha Sasana includes all the important and historical places of Buddhist worship. By doing things that will invariably result in removing Sri Pada from the control of Buddhists and placing it in the control of non-Buddhists, the State is shirking its constitutional duty of protecting and fostering Buddha Sasana.

However it is a question whether the Commission is exercising its powers independently to ensure a free and fair election. When they hear the public announcements of the Chairman of the Commission, it appears that people become skeptical

Q As a lawyer, what is your perception of the new electoral system?

The election of members on the basis of wards is useful to the people. People can have easy access to the member who is a man from their village or city ward. This may lead to better interaction between the people and their representative.

However under the new electoral system, no party may be able to obtain an overall majority in any Pradesiya Sabha. There will be weak and unstable administrations. In the election of Chairmen and Vice-Chairmen, this may lead to horse-trading, buying members.

QHow do you view the powers vested with the current Election Commission in its capacity to ensure a free and fair election?

QHow do you feel the need for a campaign finance law at this time?

Unlike under the previous system, when candidates contest for smaller wards, they do not have to bear much expenditure for running the campaign. More than the money other considerations may prevail in Local Government Elections under the ward system.

Any way it is better to have campaign finance laws enacted limiting the expenditure that can be incurred in Local Government Elections. What is more important is the strict application of the law with due penalties for violations. Otherwise it will be a meaningless thing.

QYou were critical of the 19th Amendment. It has been implemented during the past couple of years now. What is your view?

Parliament cannot be dissolved till February 5, 2020 even if the majority of Members of Parliament demands. However much the public disapproval of the government increases, the Government will continue. Thus the legislative power of the people has been ushered.

The number of Cabinet and non-Cabinet Ministers can be increased without any limit. That is how Sriyani Wijewickrama was appointed the State Minister of Provincial Councils and Local Government last week.

19th Amendment has given a license to opportunist politicians in both parties – UNP and SLFP – to rob the country and enjoy benefits at public expense in the guise of a national Government. They have paved the way for this robbery to continue even after the next General Elections. That is why some Ministers openly say that they will continue in power till 2025.

They may adopt the same strategy for running the Local Government institutions too.

There is nothing that the country nor the people has achieved with the 19th Amendment.

QHow significant is the Local Government Election this time?

This Local Government Election is of special significance for several reasons. This election is conducted after a continuous delay of almost 3 years. This is the first election to be conducted after the Pradesiya Sabhas were created in 1988 on the basis of newly demarcated electoral wards.

This will provide the opportunity for the country to test the workability of the Pradesiya Sabhas elected on the basis of the new system of electing 60% of the members from wards and the remaining 40% under the proportionate representation system. Many politicians are already claiming that there will be stable provincial administrations after the election. UPFA General Secretary Mahinda Amaraweera openly says that whoever who wins the elections will control the Pradesiya Sabhas.
This election will show the actual strength the SLFP and Sri Lanka Podujana Peramuna has with regards to votes. It will have a determining effect on the future of the SLFP and President Maithripala Sirisena. It will also have its impact on the continuation of UNP-SLFP coalition Government.

This election can amount to a referendum on the three-year performance of the Yahapalana Government. Everything will depend on the understanding of the issues and the ability of the political forces in the field.