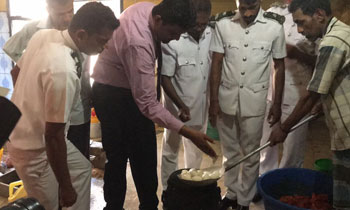 Legal action has been taken on four eateries operating at Olcott Mawatha in Fort after a raid carried out by officials of the Colombo Municipality’s Health Department. They have charged with violating food safety regulations.

Medical Officer of Health, Dr. Subash Mendis of the Municipality’s Food Hygiene and Safety Unit said 12 hotels were inspected during the raid carried out on Wednesday.

“Owners of 10 eateries selling food in a unhygienic condition, were reprimanded while the owners of two eateries agreed to close them down for two days. Cases were filed against four eateries,” he told Daily Mirror.

More than 200kg of food items including kottu, plain roti, eggs and curries found unsuitable for human consumption were destroyed during the raid.

Dr. Mendis said more raids would be carried out under the instructions of the Municipality’s Chief Medical Officer Dr. Ruwan Wijayamuni during the next two weeks to nab errant vendors and eateries. (Lahiru Pothmulla)