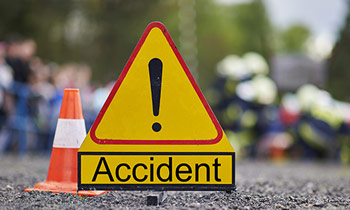 Four persons were killed on the spot including a Sri Lankan and three others injured when a lorry rammed a roadside dhaba at RV Nagar in GK Veedhi of Visakhapatnam Agency on Wednesday evening.

All the dead and the injured, except Krishna Kumari, are residents of GK Veedhi mandal.

According to Chintapalli DSP Anil Kumar, the lorry laden with cement bags was coming from Sileru when at a sharp bend on the ghat road near RV Nagar in the AGency the driver lost control and hit a two-wheeler coming from the opposite direction.

Both driver and pillion rider, Easwar Rao and Mohan Rao, fell off the lorry.

Thinking that they were dead, the lorry driver slowed the vehicle and jumped from it and ran away.

The vehcie, without its driver, later rammed into the roadside dhaba, where the four persons were waiting for a bus, said Mr. Anil Kumar

Among the injured, the condition of Mohan Rao is said to be critical with head injuries and is being shifted to a hospital in Visakhapatnam, the others were moved to Narsipatnam hospital. According to information reaching here, Health Minister Kamineni Srinivas expressed grief and ordered probe into the incident.

The Minister also directed the medical officers to immediately conduct post-mortem examination and hand over the bodies to the victims’ families. (The Hindu)