You are here: Home / Breaking News / Lakshman Kadirgamar Memorial Lecture Power of India is the people of India – Daily Mirror 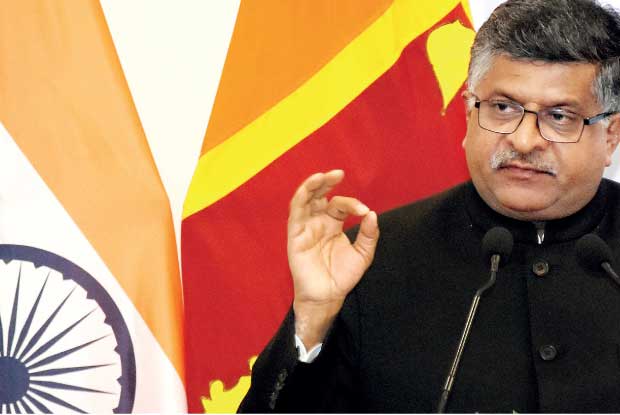 The Lakshman Kadirgamar Memorial Lecture 2017 was held at the Lakshman Kadirgamar Institute of International Relations and Strategic Studies, Colombo on January 15. The lecture was delivered by Ravi Shankar Prasad, Minister for Law and Justice and Electronics and IT, Government of India on the theme ‘The Evolution of India’s Constitutional and Democratic Polity’.

Late Foreign Minister Lakshman Kadirgamar was remembered by Tilak Marapana, Minister of Foreign Affairs and Chairman of the Lakshman Kadirgamar Institute as a true gentleman whose intellect and qualities made him a respected and recognized individual across the world. His efforts as a diplomat and minister which elevated the image of Sri Lanka in the international sphere were admired.

Ms. Sugandi Kadirgamar explained to the gathering how Minister Kadirgamar was a firm believer of democracy and resolving differences by way of constitutional reform, and referred to India as the greatest democracy in the world. As much as the theme of the lecture was in remembrance of his opinions and beliefs, there was much from it that the polity of Sri Lanka can learn.

Minister Prasad recognizes the judiciary as an important institution which has contributed to the evolution of the Indian Constitutional and political journey. Judiciary plays a pivotal role in upholding the fundamental rights of the common citizens

Basic Philosophy
Minister Ravi Shankar Prasad stated that the basic philosophy of India is contained in the comment in the Rig Veda which says that the truth is one, the wise interpret it differently. Its essence is that the final destination is one which is where the truth lies, but it may be reached using different paths. Being a country with many religions, languages, dialects and castes, embracing this ideology has propelled India to achieve unity through diversity.

Secularism
According to Minister Prasad, India respects secularism not only because the constitution says so, but because respecting each other’s’ views is ingrained in their ethos. India has allowed many different religions to flourish. Numerous sects, faiths and beliefs have peacefully co-existed in India.

In the beginning of independence, India was partitioned on religious lines and nearly one million people were killed and ten million displaced. India had every justification and provocation to convert itself into a religious state, but the abiding principle of India’s constitution is secularism and also that no one shall be discriminated on the basis of religion.

Gender Justice
Minister Prasad assured that gender justice is something that is valued by the Constitution of India. Right to franchise to women came much earlier in India and today the speaker of the Lok Sabha. Six Cabinet Ministers and two Ministers of States are also women leaders. Minister Prasad drew on the example of women flying planes in India as testimony of the extent to which gender justice has developed. Mandatory representation has been given to women in municipalities and village councils through Constitutional amendments in 1992. A similar amendment in relation to the Parliament is in progress.

Trusting the ordinary citizen
In the quest for empowerment of the deprived and marginalized, India trusts the ordinary citizen. Minister Prasad endorses the view that political democracy cannot last unless it is built on social democracy. Liberty, equality and fraternity must be recognized as principles governing every citizen’s way of life. The freedom movement of India led by Mahatma Gandhi and other great leaders trusted the innate goodness of ordinary Indians and believed that they must be given a say in the democratic and Constitutional evolution of India. According to Minister Prasad, after having guaranteed the right to vote to all adult citizens by India’s Constitution, India became the world’s first large democracy to adopt universal adult suffrage from its very beginning.

Role of Elections Commission
According to Minister Prasad, the Elections Commission of India has played a key role in the consolidation of Indian democracy. The right of every adult citizen to vote is guaranteed by an effective and impartial body which has separate statutory existence. The commission has done commendable work in preventing violence and electoral malpractices. 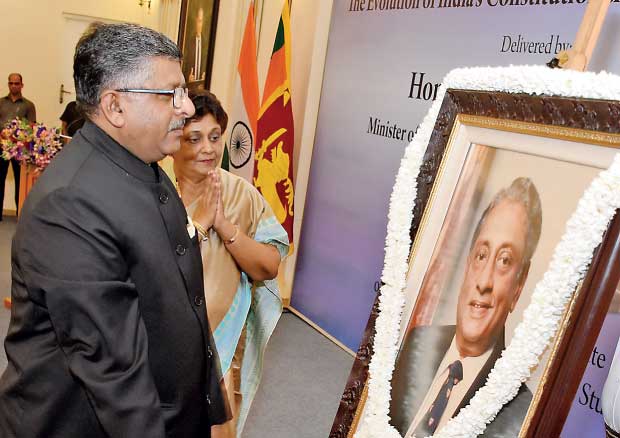 Strong judicial arm
Minister Prasad recognizes the judiciary as an important institution which has contributed to the evolution of the Indian Constitutional and political journey. Judiciary plays a pivotal role in upholding the fundamental rights of the common citizens. Many complicated issues of race, religion, ethnicity and empowerment were brought before the courts during the course of the last 70 years, and the decisions given by the courts have been progressive and thoughtful in their judgments. Public interest litigation is also an important innovation in India’s judicial system to uphold the rights of the poor and the deprived by seeking genuine accountability.

Use and innovation of technology
Minister Prasad reinforced Prime Minister Narendra Modi’s view that IT (India’s Talent) + IT (Information Technology) = IT (India’s Tomorrow). He cited a few examples of how Digital India has strengthen the democratic network and governance of the country: 250,000 village councils are linked with optical fibre network; 1.19 billion people have been given a verifiable digital identity kept in safe conditions backed by Parliamentary law; technology is employed to improve access to healthcare and education by way of eScholarships and eHospitals. The combined result of these and many other initiatives shows that India’s economy has been driven by technology. The Minister also expressed his willingness to cooperate with Sri Lanka for a safe and secure cyberspace.

Fulfilment of expectations by leaders
Minister Prasad made reference to a statement made by the first President of India Dr. Rajendra Prasad who urged for honest men who will have the interest of the country before themselves and who will rise over all prejudices if the Constitution is to acquire life. Minister Prasad proudly stated that over the last seventy years India has had leaders who have lived up to the expectations of the people and the constitution.

250,000 village councils are linked with optical fibre network; 1.19 billion people have been given a verifiable digital identity kept in safe conditions backed by Parliamentary law; technology is employed to improve access to healthcare and education by way of eScholarships and eHospitals

Holding those in power accountable to the public
Minister Prasad stated that the people of India give support to political formations at the national and regional levels. However, they also expect those trusted by them to show maturity and foresight in their conduct and appreciate the basic ideology of India. Those who have failed to do so have never had a lasting political life. This has made India a functional, effective and accountable democracy.

Minister Prasad firmly stated that the power of India is the people of India. The entire population of India knows that they can unseat any political party howsoever powerful or popular they might be. Minister Prasad quoted an eminent thinker Lord Meghnand Desai – “What makes India survive and thrive is the willingness of the people to talk to each other, to take advantage of the ballot box and to tell their rulers frequently where the limits of their tolerance and patient non-violent conduct are located.”

From the time of being subjects of the colonial regimes, India and Sri Lanka have both pursued the quest for liberty, sovereignty and the need to have a better future which propelled both the freedom movements. The path India has taken since its independence overcoming multiple differences, strengthening democratic institutions and securing the independence of apolitical institutions is a great and exemplary lesson for Sri Lanka.

Recognizing the rights of the common people with a sense of empowerment and always seeking accountability of those who are in power are characteristics that must be drawn from the Indian Constitutional and democratic polity and internalized in our polity. It is a timely requirement that these aspects of governance and citizenship are paid due consideration as we are very much in the process of nation-building.