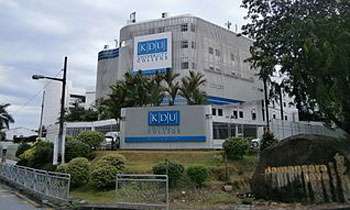 The first batch of the SAITM students, who were absorbed to the General Sir John Kotelawala Defence University (KUD) for the MBBS Degree, had been instructed to pay around six million rupees as course fee for a period of five years, the Daily Mirror learns.

A parent of a SAITM student informed the Daily Mirror that they were informed this when they attended at the interviews today at the KDU premises in Ratmalana.

The interview board had instructed the parents to pay the 1st instalment of Rs 680,000 and a library deposit of Rs 6,000 which includes a non-refundable deposit of Rs. 2,000 before Monday (6) when they would be registered.

The students were told that the lectures would begin from Tuesday, August 7.

In a letter issued to the students, it had instructed to pay an annual course fee of Rs 1.36 mn where they have to make the first instalment by November 30 and in the same date each year.

In the letter issued to the parents, it had asked to deposit the money to BOC Account 9405831, Idama, Moratuwa Branch.

A parent of SAITM student said that they were told to forget what they have paid to SAITM institute and the students who failed to pay the KDU course fee would not be absorbed into KDU.

“We were not informed about such thing. This is very wrong. We have pawned our properties to enrol our children at the SAITM. There is no way that we can pay such a big amount so soon. We were misled by the Government again,” the parent told the Daily Mirror.

When contacted, KDU Deputy Vice-Chancellor (Defence and Administration) Major General Indunil Ranasinghe said that he could not disclose any detail of the enrolment officially.

“I cannot comment on this matter officially. I’m not aware of the letter given to SAITM students stating the course fees. I was not on the Interview Board,” he added.

The John Kotelawala Defence University (Special Provisions) Bill, to absorb SAITM medical students into the KDU, was passed in Parliament with amendment on June 20. (Thilanka Kanakarathna) 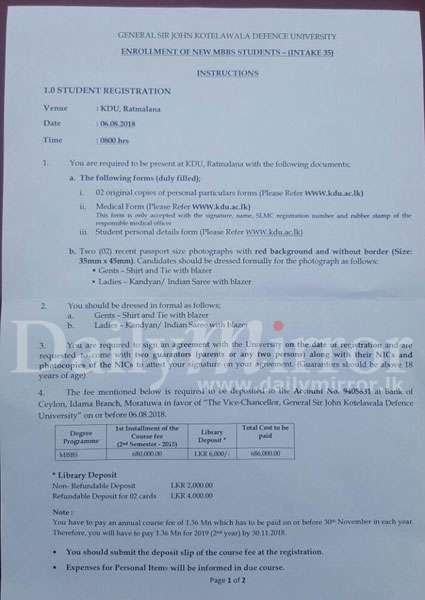