You are here: Home / Breaking News / JVP: Will topple the Govt. if there is an opportunity – Daily Mirror 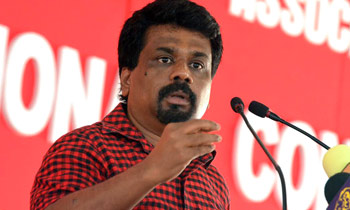 The Janatha Vimukthi Peramuna (JVP) was ready to topple the incumbent Government even before 2020 if there was an opportunity, party leader Anura Kumara Dissanayake said today.

Speaking at the forming of Diriya Samithi in Maharagama yesterday, Mr. Dissanayake said people would have to punish them now if the FCID, Judiciary or the Attorney General was not going to do so.

“If the FCID, Judiciary or the Attorney General was not doing it people will have to do it. Corruption has to be pushed out of office. It has to be done at the national election of 2020. However, we are ready to do it even before if there is an opportunity,” he said

“Every ruler in the past went through a period where he or she could sail smoothly. However, this regime had become unpopular very soon. This is not an issue with Maithri or Ranil. This is because the social system is going down rapidly. This is going to become a norm in Sri Lankan politics in future. People will have to face this situation,” he said.

He said it was essential to set up centres in villages, which can capture power at the 2020 elections.

“Doctors, fishermen, peasants and students fight for their rights through their associations. Villagers do not have such associations. They are virtually slaves. However, we will establish a people’s network. The closely knitted associations among the villagers are no more. The entire village used to moan whenever there was a funeral, entire village used to come together whenever someone fell ill. One cannot find such a close association among the villagers today. Other political forces establish village level associations to get jobs for their members. However, our associations are ones which could influence the Government in development,” he added.

Mr. Dissanayake stressed that country’s economic strategies should be changed.

“There was urbanization in many parts of the world. China, and the United States of America and a number of other countries became urbanised. More than 100 million people migrate into urban areas in China annually. However, in Sri Lanka it did not happen. If there were public holidays for four days, in Colombo one cannot find a shop to have a cup of tea. The development has to be village centered, a road net work and a communication net work is needed. This should be country’s development strategy,” he said.