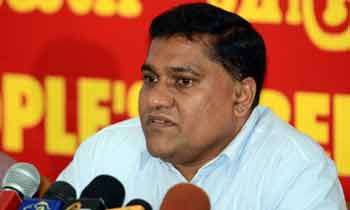 The Janatha Vimukthi Peramuna (JVP) today urged the government to reduce the recently increased fuel prices and said the government was earning the tax income on fuel unreasonably, showing losses of the Ceylon Petroleum Corporation (CPC).

JVP MP Vijitha Herath told a news conference that the fuel prices were increased because the excessive taxes imposed on fuel and not because of the crude oil price increase in the world market or the depreciation of the rupee.

The MP said it was the government that was earning the tax income on fuel and added that the CPC did not receive the benefit of the increase even though the price was increased, showing losses to the CPC.

He said the government had imposed a tax of Rs.111 on a kilo of milk powder apart from the recent increase of Rs.50.

“The government is not using this tax income for the benefit of the people. It has allocated an additional Rs.750,000 for the agricultural ministry building for which more than Rs.900 million has been spent during the past couple of years. Millions of rupees were lost due to the Central Bank bond scam. The government is imposing taxes to recover those losses,” the MP said.

JVP politburo member K.D. Lal Kantha said they had organized a series of protest campaigns against the increase of taxes and that the first would be held on May 22 in Colombo. (Ajith Siriwardana)