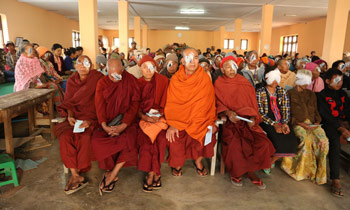 In a letter sent to President Maithripala Sirisena NBF has showed their displeasure over the hospital decision and raised their concerns on the free health care service in the country.

The NBF General Secretary Ven. Wakamulle Uditha Thera said the SJP hospital had carried out a good quality practice however, are now charging from the monks who are seeking treatment out of five km radius.

The NBF has condemned the hospital authority’s decision and said during a time when the country celebrated the International Vesak Day the move had sent negative message to the world that the government is not providing medical assistance to the Monks in the country.

“The country’s population of clergy is less than 100,000 a 0.43% percent of the total population. In that context it is very low population that seeks treatment from Sri Jayewardenepura Hospital. It is a discriminatory judgement not only in the health sector but also affects our culture,” Ven. Thera said.

Further, Ven. thera said the hospital was constructed in 1984 with the Japanese funds was then agreed to treat the clergy free of charge.

Therefore Ven. thera requested from the President to withdraw the circular immediately.(Thilanka Kanakarathna)