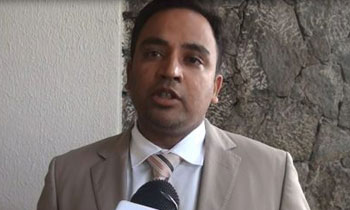 By holding a news conference in a vehicle park near the entrance to Parliament, the joint opposition is attempting to create a misconception that the government was depriving the JO of its political freedom, the United National Party (UNP) said yesterday.

UNP MP Harshana Rajakaruna told a media briefing that the JO members were desperately attempting to show that it was being deprived of its proper status in Parliament.

“The JO has said it was forced to hold the news conference in the vehicle park because it was not permitted to do so inside Parliament. There is a procedure to allocate a committee room in Parliament for a discussion,” he said.

Mr. Rajakaruna said it was not easy to make such allocations and that those rooms were available only for the use of cabinet ministers or party leaders. He said the JO was continuing its campaign of lies to give a wrong impression to the people.

Referring to the parliamentary session at which joint opposition leader Dinesh Gunawardane was suspended from attending parliamentary proceedings for one week, Mr. Rajakaruna said this was the first time in parliamentary history that such a thing had happened.

“MP Gunawardane has tarnished the image of Parliament by behaving in such a despicable manner,” he said. (Kalathma Jayawardhane)