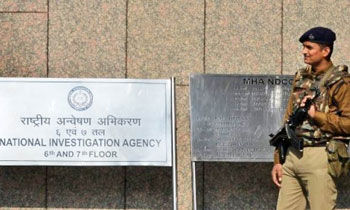 Alleged Islamic State (IS) recruiter from Kerala, Abdul Rashid Abdulla, accused of `instigating’ 22 youths from Kerala to join the terror outfit, was sternly asked to leave a religious school in Sri Lanka on account of his radical views, according to a chargesheet filed by the India’s National Investigation Agency (NIA).

According to the chargesheet against Abdulla and Islamic Research Foundation’s guest relations manager Arshi Qureshi, Abdulla and 17 other Indians at the school in Sri Lanka were warned never to raise such issues again, and were categorically told, “Jihad is to fight with bad elements of your own self, Jihad does not mean fighting and killing innocent people.”

Among those who attended the religious school, that had arranged for special classes on the Quran, there were 80 Sri Lankans and 18 Indians.

The six-volume NIA chargesheet includes statements of 49 witnesses. Among them are statements from three of the 22 youths who were allegedly instigated by Abdulla and Qureshi to join the fight in Syria. The names of witnesses have been redacted from the chargesheet by the NIA.

According to the charge sheet, Abdulla had decided to go to Sri Lanka along with some other Indians to gather more knowledge on the Quran before travelling to Syria to join the battle there.

According to the chargesheet, Abdulla and some other Indians asked some questions to Nava. “They asked, ‘what is the importance of Jihad? Is ISIS on right path?, why no to Jihad when many Muslim brothers are getting killed?, why we are only studying books in the class?’This discussion lasted for two hours. At the end of argument (name redacted) and (name redacted), agreed that their doubts were cleared. Navas Sheikh clarified that real definition of Jihad is to fight with bad elements of your own self, Jihad does not mean fighting and killing innocent people,” the statement reads.

“However after this discussion Rashid and (name redacted) booked return tickets to India. On the day of their departure, I went to Navas’s office to inform that they were going back to India. Then Navas called them to his office. There was strong debate among them, which lasted for one and half hour. After the debate Navas told them to leave the campus at once. On the same day, the group left the campus,” the witness statement adds.

Besides elaborating about Abdulla’s role in detail, the chargesheet accuses Qureshi of “mushrooming the ideology of joining war in order to help Muslim brothers who are in trouble.“(DNA)