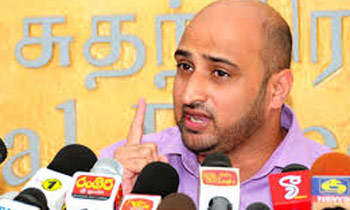 National Freedom Front (NFF) Media Spokesperson Mohammed Muzammil claimed today that they are in doubt whether the Memorandum of Understanding (MoU) to hand over the China Bay Oil Tank Farm in Trincomalee to India would be signed during the Prime Minister Ranil Wickremesinghe’s visit to India or not, despite PM’s assurance that he would not sign.

“A secret arrangement is underway to hand over the Trincomalee China Bay Oil Tank Farm to India by the Ranil Wickremesinghe’s government after signing the MoU. We are not sure whether the MoU will be signed during his visit to India or during the Indian Prime Minister Narendra Modi’s visit to Sri Lanka in the midst of Wesak celebrations,” Muzammil said.

We have revealed some important facts so far regarding the signing of agreements, he said.

“In 2003 Ranil Wickremesinghe had handed over number of oil tanks to India. India is in the process of acquiring the remaining oil tanks. Several rounds of discussions have been held to hand over ownership of several plots of land near the Trincomalee harbour to India for a minimum period of 50 years,” Muzammil said.

Energy was one of the main elements which gives equal prominence as national security of a country, he said.

“India is trying to interfere in Sri Lanka’s energy sector and trying to control the country’s destiny through the Wickremesinghe’s government,” Muzammil said. (Chaturanga Pradeep)