You are here: Home / Breaking News / I am against restriction of media: Mangala – Daily Mirror 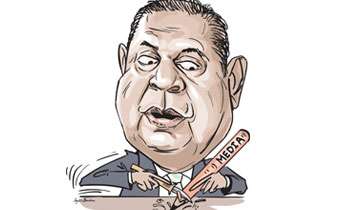 Finance and Mass Media Minister Mangala Samaraweera said yesterday that under no circumstances should a website or any other media outlet be restricted, censored of suppressed no matter what they broadcast.

He said they must enjoy freedom of expression under the yapalanaya government.

“If any electronic or print media institution engages in disseminating information in an unethical manner and sling mud at individuals, do character assassinations, publishes, broadcast or telecast fabrications, misinformation and complete untruth the people at large must be intelligent enough to take only the good and reject all other contents,” the minister said.

He told the media at the launching of the Presidential Media Awards scheme that the government had done its utmost to free the media from the influence of the ruling party and as a result the media enjoy unprecedented freedom as never before.

“Therefore, it is up to the media personnel to enjoy the new found freedom to the fullest and use it for the benefit of the country and themselves. I totally reject any sort of restriction on the media and I don’t like the term ‘Walburu Nidahasa’ or the ‘freedom of the wild ass’,” the minister said.

He said there were many issues that troubled media personnel and in particular among provincial correspondents.

State Minister of Finance, Eran Wickramaratne said certain media outlets have their personal agendas and they use them media to reach their targets but the yahapalanaya government was committed to safeguarding media freedom at any cost.

The dialogue between Minister Samaraweera and the DM was as follows.

It is a known fact that certain websites engaged in character assassinations, mud slinging and fabrications. Why cannot the government do anything about this?

I don’ believe in restricting or censoring the media in any manner.

Why can’t the government take any legal action against errant websites?

I don’t think we have legal provisions to act on this issue.

The New York Times exposure has created much controversy in and out of the country. The exposure is not good for the country.

Yes, indeed. Two journalists have already complained that they have been threatened by those who came under scrutiny after the exposure that said former president Mahinda Rajapaksa had received US$7.6 million from China Harbour Engineering Company (CHEC) for his election campaign.

Don’t you think these exposures harm the bilateral diplomatic relations between the two countries?

Of course I do. It is a very bad precedent and also an insult to Sri Lanka when leading politicians obtain bribes from a friendly country for his election propaganda.

A prominent Buddhist monk has also received US$38,000 from the Chinese.

Yes, that monk has admitted that some Chinese nationals not known to him came to his temple and gave him US$38,000 in 2015 and he could not recollect who they were.

Mr. Rajapaksa is going to file a case against those two journalists who have allegedly given information on the deal to the NYT.

He must not sue the NYT, not journalists. If, I were the on exposed by the NYT for this deal, I would have sue the paper for sure to get my name cleaned.

Chinese embassy has expressed reservations on the exposure by the NYT. Minister

Mahinda must not attempt to get character certificates from China. He must sue the NYT if the newspaper exposure was incorrect. It is as simple as that.