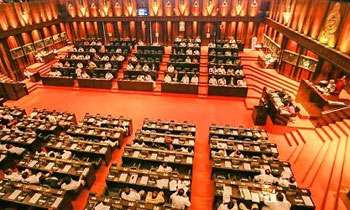 Parliament was the scene of heated arguments today when joint opposition MP Wimal Weerawansa claimed that some UNP organizers in Colombo had distributed contaminated packets of milk to those who participated in Wednesday’s ‘janabalaya kolambata protest.

He said some substance had been injected into the packets before distribution. “Those who consumed the milk in these packets suffered from loose motions,” the MP said.

UNP MP Mujibur Rahaman who responded said no such thing had happened. He said the JO supporters had started purging after consuming expired packets of milk distributed by JO members themselves. “There is no reason why we should distribute such packets,” the MP said.

The argument continued when joint opposition MP Indika Anurdha pointed out that were an inufficient number of MPs in the House for the sessions to continue. Deputy Speaker Ananda Kumarasiri who was in the Chair asked for the quorum bell to be rung. The sessions continued because the bell brought in a required number of MPs to the chamber. (Yohan Perera and Ajith Siriwardana)