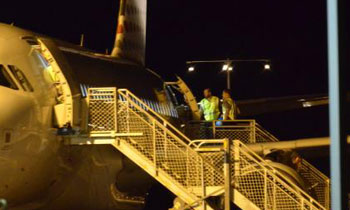 A plane chartered by the Australian Department of Immigration and Border Protection has left the Australian territory early yesterday with about 20 people — some of them guards and interpreters — onboard, The Australian reported..

The Sri Lankan nationals were led up the steps of the plane with a guard on each side.

The return of Sri Lankans from Christmas Island to Colombo overnight on a government charter jet has fuelled speculation that Australian Border Force has inter­cepted a suspected asylum vessel in the past week.

Christmas Island residents yesterday linked the deportations to an unusual spectacle last Thursday when two of the navy’s rigid inflatable vessels were seen towing a small boat close to the horizon.

The last known intercept of an asylum vessel on its way to Australia was in March.

The March monthly update on the department’s website stated: “During this period, Australian authorities worked with the government of Sri Lanka to return 25 people who were detected and intercepted attempting to reach Australia ­illegally by boat, in accordance with Australia’s protection obligations.’’

The Sri Lankan government has been willing for some years to swiftly take back failed asylum-seekers stopped en route to Australia.

During the sustained wave of boats between 2008 and 2013, Christmas Island sometimes held more than 6000 immigration detainees.

It now operates one detention centre with fewer than 1000 men, but many of them are not asylum-seekers. Instead, the centre has become a place to hold mostly men who are citizens of other countries and have committed crimes while ­living in Australia. Once their jail term ends, they are transferred to immigration ­detention to await deportation.