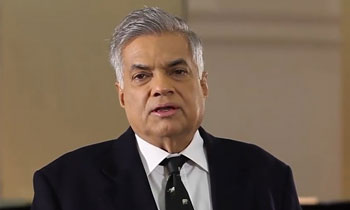 Prime Minister Ranil Wickremesinghe, in his pre-budget economic policy statement to Parliament, said the government’s traditional approach to debt management would have to change to cope with new risks and structural and regulatory changes.

He said the government had to face many other challenges in 2018 and 2019 in terms of public debt management and fiscal consolidation.

“The domestic debt portfolio mainly consists of Treasury Bonds. Around 30% of the Treasury Bonds will mature by 2019. Similarly, Sri Lanka Development Bonds, which is a US dollar- denominated domestic debt instrument worth of more than US$2.3 billion maturing by 2018. In addition, the composition of the foreign debt portfolio has also changed considerably. This change occurred mainly due to the increased mobilization of commercial loans such as the issuance of International Sovereign Bonds. We have to pay US$1.5 billion in 2019 for maturing International Sovereign Bonds. Further we have to pay annually thereafter.

“Our policies will target forward-looking liability management strategies. Accordingly, the funds required by the government will be raised with transparency and predictability. Under the medium – term debt management strategy, the detailed strategies of government borrowings will be known in advance to the domestic and foreign debt portfolios. In addition, we will introduce a comprehensive secondary market trading platform and a liability management fund. These reforms and future reforms will come into effect under the new Fiscal Liability Management Act that provides legal framework for a prudent debt management strategy.

“As for maintaining low inflation, he said the government would provide the space to the Central Bank to carry out its monetary policy independently and maintain price stability on a sustainable basis.

“The Central Bank is moving towards a new monetary policy framework targeting a flexible inflation. The aim of this framework is to maintain a low inflation continuously while supporting the economic activities. With this change of policy, our people will get the opportunity to live comfortably with the security of stable prices,” he said.

Referring to the three-year Economic Delivery Programme, he said the government intended to raise per capita income to US$5000 a year, to create one million new jobs and to increase Foreign Direct Investment to US$5 billion a year.

The Prime Minister stressed the need to strengthen private-public-partnerships.

“We hope to harness the power and energy of PPPs to improve efficiency and agricultural productivity. The agriculture sector is saddled with major issues such as low productivity, lack of diversification, inefficiency in water management, and poor management of weather disruptions. Weaknesses in the sector contribute to food insecurity and regional poverty. We will revitalise this sector through investments in agricultural research, extension services, water resources, and infrastructure facilities. We will facilitate the shift from traditional low value to modern high value agriculture. We will encourage scientific farming, promote agro-based industries and initiate commercial agriculture with the participation of farmer organisations and the private sector” he said in this regard,” the Prime Minister said.

“We will improve the domestic supply chains and distribution networks to do so. In the meantime, we will allow importing of food products and other essential commodities at reasonable costs within the competitive market framework” he added elaborating on the steps government will take in order to control inflation, the Prime Minister said.

He told Parliament the government would introduce a pension scheme for those who were working in informal sectors of the economy.

“A number of projects which accelerate our journey towards a stronger economy are being implemented. We are building a well-planned expressway system from Hambanthota to Kandy. We have obtained funds for that. We started a joint venture in Hambanthota Port this year. Discussions are being held to start a joint venture in Mattala Airport as well. We have started working on Hambanthota economic zone. Millaniya Trade Zone has been planned already. Wayamba Industrial Zone has also been planned. The constructions of those zones will commence next year. This is a very challenging journey towards prosperity. This is a plan to enrich the country by 2025. This is an effort to make Sri Lanka again, the economy and trade hub of the Indian Ocean. I urge all of you to join hands with me in this challenging journey towards the prosperity of our motherland,” the Prime Minister said. (Yohan Perera and Ajith Siriwardane)