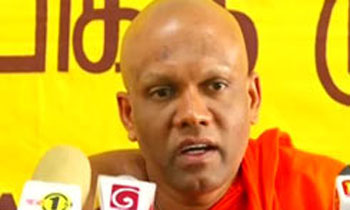 The National Bikkhu Front (NBF) today accused the government in attempting to cover up the Bond Scam by highlighting the incident of the imprisoning of former Presidential Secretary Lalith Weeratunga and former Director General of the Telecommunication Regulatory Commission (TRC), Anusha Palpita for three years.

Addressing a press briefing in Colombo, NBF General Secretary Ven. Wakamulle Uditha Thera said though the verdict added a little relief to the general public, there is an attempt to sweep the Treasury Bond scam under the carpet by highlighting the event.

The Thera said the JO is also directing the attention towards a different direction had launched a fund raising already to pay the fine.

“If Weeratunga had resigned his portfolio soon after the former president ordered him to conduct wrongdoings. It cannot be justified now seeking the public’s mercy and pursue their support to reimburse misappropriating funds,” Thera said.

Thera further said that Weeratunga and Palpita were only fined Rs.100 million even though misappropriating was Rs.600 million belonging to the TRC.

Therefore, the Thera raised questions whether the punishment was sufficient as a fine of Rs.100,000 was charged against a motorcyclist for violating a traffic rule recently. (Thilanka Kanakarathna)