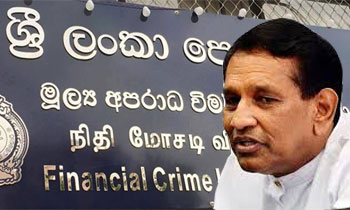 President Maithripala Sirisena, Prime Minister Ranil Wickremesinghe and the ministers have expressed disappointment over the slow progress of the investigations and the action taken against suspects by the FCID, Cabinet spokesman and Minister, Rajitha Senaratne said yesterday.

He said the Cabinet had called for a report on the FCID and would decide on its fate next week.

The minister told reporters at the weekly cabinet news briefing that the President while expressing his disapproval on the FCID activities had said if the FCID was brought under his purview, he would within six months expose all major cases of fraud, corruption and killings which had taken place during the Rajapaksa regime and prosecute the culprits.

“The Cabinet discussed the FCID’s poor performance as only a few sprats had been brought before the law by investigative division which was appointed with the specific objective of nabbing all criminals whether big or small who were very powerful under the Rajapaksa regime. Even the Prime Minister while maintaining that the FCID was not his creation told ministers that he also was not satisfied with the work being carried out by the FCID,” he said.

The minister said the FCID had failed miserably to nab big-time criminals who had engaged in major financial crimes, killing and embezzlement when the Rajapaksas were in power.

He said the government spends Rs.1.2 million monthly to maintain the FCID. Much publicized investigations had been carried out against Minister A.H.M. Fowzi using a car belonging to another ministry and appointment given to his daughter by former state minister Priyankara Jayaratne.

“The big sharks like Gamini Senarth are still at large. The investigations on the killing of ruggerite Wazim Thajudeen is not satisfying. Pilfering of millions of dollars of state revenue and dumping them in foreign banks and the withdrawal of billions of rupees on election day in January 2015 have still not been unmasked,” the minister said. (Sandun A Jayasekera)