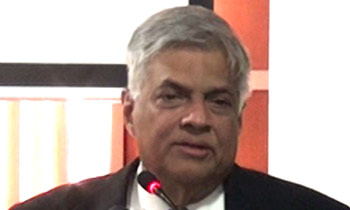 He told those who had gathered at the opening of a new office of the Rural Economy Ministry that the Government would get the private sector involved in it as well.

“The Ministry of Rural Economy has to move away from traditional thinking and on move in this direction is the setting up of a national agricultural marketing authority with the objective of helping our farmers,” the Prime Minister said. “The debt we have inherited amounts to more than Rs 400 billion which has to be repaid within the next ten years. Domestic debt is much higher. The revenue will have to used to repay these debts. We have to think out of the box. We need innovative ideas. Countries such as China, Korea, Japan and Vietnam have achieved development by using new ideas. While these countries have changed, Sri Lanka is stuck in one place after the end of the war.”

He said the country needs peace for the economy to flourish.

He said the country has to focus on livestock development with good varieties of cattle being provided to farmers. “We intend giving a glass of milk to children in rural schools. Instead of doing so with milk powder, we need to focus on providing them with fresh milk. Another objective is to convert poultry to an export industry. We can get a market for this produce,” the Prime Minister said. (Yohan Perera)