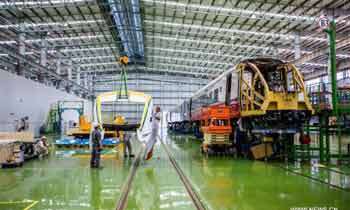 The Ministry of Development Strategies and International Trade today categorically refuted the allegations made in the media regarding a project to set up a manufacturing plant for high powered railway equipment.

It said in a statement that a series of articles appeared in the media regarding the project and by those articles several misconceptions have been created with regards to this project.

To this effect a high powered committee was set up in December 2016 to evaluate and approve large scale investments and fast track the approval. This committee known as Single Window Investment Approval Committee (SWIAC) is chaired by the Secretary to the Treasury and consists at present of the following senior officials:-

“The High Speed Railway Project in question is one of 5 of deferred projects as the investor had submitted incomplete information which made it not possible for SWIAC to approve this project. The current status of this project is that it is not rejected, but the investor in question needs to provide the necessary information requested by the committee so that it could be considered for approval,

The reason why the project has been deferred was because of concerns raised by the Committee regarding the past track record of the Company, technical know how,financial credibility of investors, market orientation and justification of the requirement of 4,000 acres of land for the project. In view of the above, the Committee which met on 04th August 2017 was of the view that the decision could not be taken due to lack of clarity and information.

The investor was informed to re-submit the proposal by addressing the concerns identified by the Committee,” it further said.

“The proposal was re-submitted by the investor on 11th October 2017. But the Committee held on 10th November 2017 ruled that approval was not possible because the investor failed to submit a comprehensive project proposal with the required information,

Accordingly the SWIAC has instructed BOI to issue a letter to the investor to submit a comprehensive report,

This is a requirement which SWIAC requests from all investors and not just this project. It is therefore important that all investors need to submit the essential details required by SWIAC to grant approval. It is on this basis that 26 projects have been already approved which include 14 manufacturing projects, 5 utility projects, 3 projects involving, Tourism, Agriculture and IT and 4 infrastructure projects,” it said.