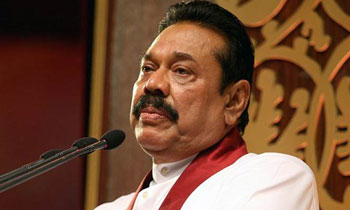 The government has borrowed over USD 14.6 billion in foreign currency loans alone during the short period of 36 months that this government has been in power, former President Mahinda Rajapaksa said today.

He said even though 14.6 billion USD would suffice to build five Norochcholai power plants, five Hambantota harbours with enough money being left over to build two more Southern Expressways, the yahapalana government had not built even a culvert with that money.

“I have made reference so far only to foreign currency loans. From January 2015 to date, the yahapalana government has borrowed well over Rs. 5.7 trillion in Rupee loans as well, through the issue of treasury bills and treasury bonds,” he said.

The yahapalana government has marked its third anniversary by claiming credit for projects for which money was allocated and started by the previous government, he said.

On 9 January 2018, the so-called yahapalana government completes three years in office. During this short period they have created numerous crises running through virtually every sector in Sri Lanka. The main subject of public discussion today is the bond scam and the attempts being made by the yahapalana leaders to sweep it under the carpet. We are awaiting the release of the full report of the Bond Commission. The bond scam is only one of the many disasters brought upon this country by the yahapalana government. As this government marks its third anniversary, I wish to draw the attention of the public to another danger they have brought upon this country.

During the short period of 36 months that this government has been in power, they have borrowed over USD 14.6 billion in foreign currency loans alone, the breakdown of which would be as follows – USD 7.2 billion through the issue of Sri Lanka Development Bonds from January 2015 onwards, USD 3.6 billion from sovereign bonds issued in 2015 and 2017, USD 2.2 billion through currency swap arrangements with India in 2015 and 2016, USD 1.7 billionthrough syndicated loans arranged through several international banks in 2016 and 2017 and USD 1.5 billion from the IMF Extended Fund Facility in 2016. No previous government has borrowed so much money through foreign currency loans in such a short period of time.

Even though 14.6 billion USD would suffice to build five Norochcholai power plants, five Hambantotaharbours with enough money being left over to build two more Southern Expressways, the yahapalana government has not built even a culvert with that money. I have made reference so far only to foreign currency loans. From January 2015 to date, the yahapalana government has borrowed well over Rs. 5.7 trillion in Rupee loans as well, through the issue of treasury bills and treasury bonds.The government commissionedthe Moragahakanda project and opened the Rajagriya flyover to coincide with its third anniversary so as to answer the critics who say that the yahapalana government has not built anything tangible despite massive foreign borrowings. However, the Moragahakanda project was planned, financial allocations were made and construction commended under my government way back in 2007 in accordance with the 2005 MahindaChintanaprogramme.  Likewise the Rajagiriya flyover was planned and money was allocated for its construction by my government. Cabinet approval was granted to call for bids to select contractors for the construction of the flyovers in Rajagiriya, Polgahawela and Ganemullaat the cabinet meeting held on 4 December 2014.

The yahapalana government has marked its third anniversary by claiming credit for projects for which money was allocated and started by the previous government. They came into power in 2015 claiming that there was a debt crisis in the country due to the loans taken by my government to build power plants, harbours, airports, expressways etcetera.  However the total cost of these major development projects were as follows: USD 1,350 million for all three phases of the Norochcholai power plant; USD 740 million for the Southern Expressway from Kottawa to Matara; USD 1,300 for phases I and II of the Hambantotaharbour and its bunkering facility; USD 292 million for the Colombo-Katunayake expressway and USD 209 for the Mattala airport.

All these development projects put together cost less than USD 3.9 billion. The claim that the present government has been forced to borrow heavily to repay the project loans taken by my government is a complete lie. With the 14.6 billion USD in foreign currency loans that this government has borrowed up to now, the loans taken for all the above mentioned development projects could have been repaid four times over.The debtnow being incurred is used to meet the day to day expenses of the yahapalana government and not to repay the project loans taken by my government. From January 2015, there was a massive and unplanned increase in government expenditure as a result of state funds being utilized to meet political objectives. The present debt crisis came about due to the yahapalana government borrowing heavily in Rupees and in foreign currency in order to meet this increased expenditure.

Foreign currency loans should always be taken with the utmost care. Since it is necessary to purchase foreign currency to repay such loans, even a slight change in the exchange rate can give rise to a massive increase in a country’s indebtedness. According to the 2015 and 2016 Central Bank reports, due to the depreciation in the value of the Rupee as a result of the economic downturn that took place after the yahapalana government took office, an extra Rs. 478 billion has been added to the national debt. It should be noted that the increase in the interest rate by about 50% due to the bond scam, has also added to the debt burden.
My government was always very careful in taking foreign currency loans. According to the Finance Ministry, the repayment of foreign loan installments plus interest during the period 2008-2014 was as follows:

Since these are not unmanageable amounts, my government never had a problem with foreign loan repayments. The present crisis is entirely a creation of the yahapalana government. The foreign loan instalments and interest thereon that have to be paid after 2015 is as follows:

These figures amply explain the difference before and after the change of government in 2015. The immediate increase in repayments from 2015 onwards is due to the huge short term commercial loans taken by the yahapalana government to be repaid in a few months or one or two years. What Sri Lanka experienced in 2015 was a borrowing frenzy. Central Bank records indicate that before the yahapalana government came into power, Sri Lanka Development Bonds were issued only twice a year with the amount borrowed per year not averaging even USD 350 million between 2010 and 2014. It should be borne in mind that this was at the height of the biggest infrastructure building programme in recent history. But in the year 2015 without a single new infrastructure project being initiated, the yahapalana government issued Sri Lanka Development Bonds on no less than nine occasions. The number of SLDB issues made in 2016 were six, with four being made in 2017.
The government has now obtained cabinet approval to borrow a further USD 5 billion in foreign currency commercial loans in2018 as well. In order to repay these loans taken for consumption purposes, the government has increased the tax burden on the people to an unbearable level by increasing the VAT, vehicle import duties, commodity import taxes, various levies and fines and stamp duties etcetera. From April 2018 onwards, the government will commence a programme to bring virtually every adult in the country into the income tax net.

Since the massive loans taken by the yahapalana government cannot be repaid simply by increasing taxes, they have now started selling off all available national assets ranging from government owned hotels to harbours, expressways to power plants. Though the government claims that the Hambantota port was sold off because the loan taken to build it could not be repaid, the proceeds of the sale have not been used to repay the project loan but is to be sent instead to the Treasury to be spent on consumption – which reveals the actual motive in selling off these assets. Since the Hambantotaharbour was built with long term loans at concessionary rates of interest, the government is in no hurry to repay the loan taken to build it.

However there is an urgent need to repay the short term foreign currency commercial loans taken by this government for consumption purposes even if the payment has to be made with the money realised through the sale ofnational assets. If such commitments are not met on time, Sri Lanka will get locked out of the international financial markets. I request all voters to use the opportunity that will come their way on 10 February to register their protest at the disaster brought upon the financial system of this country by this corrupt, incompetent government.