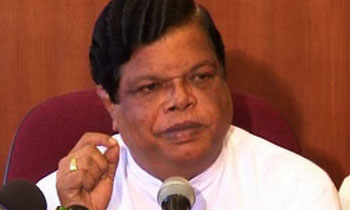 Sri Lanka’s economy had been dropped in many global indexes, due to the corruption in the Central Bank and other unhealthy development activities taken place in the country, Joint Opposition MP Bandula Gunawardena today said.

“In the reviews of the Bloomberg’s Global Risk Briefing, Transparency International’s Corruption Index 2016, Global Hunger Index and Fitch Ratings Sri Lankan economy has pushed downwards and the meantime US$ 100 million has been issued by the Central Banka to avoid the Rupee depreciating, while the country’s reserves are already limited,” he said.

He said it was after perusing these international organisational reports, the investors decided whether to launch their investments on this land or not. “The reports show the country’s economy had been hit so badly, even though the unity government repeatedly says it is not,” he observed.

“The net foreign direct investments at the end of 2014 which was at USD884 million has been reduced to USD650 million in 2015 a year after the Unity government came to power, according to the Minister of Development Strategies and International Trade Malik Samarawickrama,” he said.

“Country’s Banks forced to sell their bonds to the people and beg money at an interest rate of 13.25%. What would ultimately happen is people have to take personal and housing loans at an interest of 20% – 25%,” he added.

MP Gunawardena stressed that so far the foreign investors had withdrawn their money amounting to USD2.6 billion as a result of this economic instability, for which the current government is directly responsible.

He further said that the government has recognised the threat to the economy and desperately tries to cover it up and using unprofessional methods to recover from the loss by selling country’s land and other government institutions, which could drag the country into more danger. (Thilanka Kanakarathna)