You are here: Home / Breaking News / Giving Police powers to PCs is not the solution: Champika – Daily Mirror 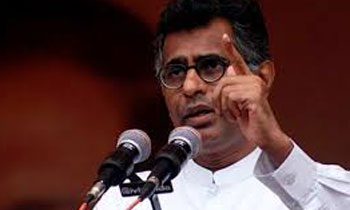 He said Sri Lanka was a country that had undergone a series of violent riots, where 2 to 3 per cent of the population was assassinated by unidentified gunmen and people were killed on roads in bomb attacks.

“We don’t have the practicality to devolve police powers only because some NGOs and elements depending on foreign funds request to do so. The best option is to recruit Tamil speaking officers who have the knowledge of the Tamil culture to the police service. The new government has recruited such officers in abundance. The solution to the national question is not devolution of police powers but the recruitment of Tamil speaking officers,” the Minister told a ceremony held to inaugurate the carpet laying ceremony at Kudamaduwa Road.

He said requests to devolve police powers had been generated from the 13the Amendment to the Constitution which was introduced by India.

“What is happening in India today? There are terrorist groups in at least 14 States. One of the main obstacles the authorities have to face when fighting terrorists is devolution of police powers among different states. This is a blow to the law and order of that country,” he said. (Lahiru Pothmulla)