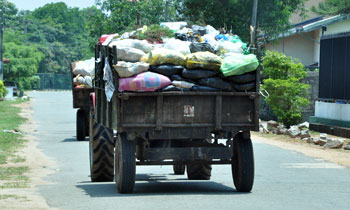 An attempt to dump the garbage sent from Karadiyana at a ground in the Attidiya area was thwarted by residents with the support of former Dehiwela-Mount Lavinia Municipal Council members today.

The garbage trucks which were turned away from Karadiyana earlier today were then sent to Attidiya by officials, where it was not allowed to dump its load once again by residents and local government members, who gathered at the ground since morning.

Speaking to the Daily Mirror, former Councillor Upul Gamage said that a court order had been issued preventing the dumping of garbage in the premises in 2015.

“The Municipal Council paid Rs. 100,000 per day to a private company named ‘Burns’ to recycle the garbage. They used some kind of chemical which damaged the environment and this led to legal action with the court issuing an order banning the dumping of garbage at the site from 2015,” he said.

Due to the tense situation, the garbage trucks did leave the previous dumping site, but were seen travelling around Attidiya and its suburbs searching for a place to dump garbage. (Thilanka Kanakarathna)