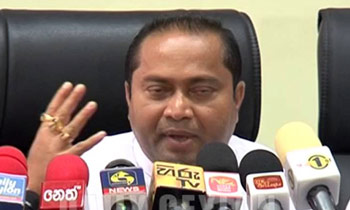 Addressing the media at the SLFP Head Quarters, the Chief Minister said several tenders had been called for large scale projects for the initiation of garbage disposal in the Karadiyana and Muthurajawela garbage dumping areas.

The 25 garbage dumping areas were created due to the failure of not building the sanitary landfill in Meepe by the previous politicians, he said.

“Special projects like garbage management had arrived to the country during the previous governments too and those projects had been stopped by the then oppositions,” he said.

“All we have left is signing the agreements for projects by the provincial councils. The Urban Development Authority had taken steps to hand over the Muthurajawela land area to an Indian Company. After initiation the projects we hope to send 500 tonnes of garbage from the Western Province to Muthurajawela garbage management project.

The remaining 500 tonnes of garbage will be provided to investors who have their own lands.

Accordingly, measures have been taken to solve garbage dumping issues in Colombo, Kalutara and Gampaha areas. To initiate these projects it would take at least two and a half years, or maximum three for the construction of the sites and to install the machinery. The Western Provincial Council also hopes to donate at least 50 MW of electricity to the main grid as a result of the projects.

“Until the projects are initiated, we can dump the garbage in Karadiyana area. Likewise, if powers were given to nine provincial council chief ministers in the country, they can deal with the garbage and provide solutions to the country,” Chief Minister Devapriya said. (Chaturanga Pradeep)