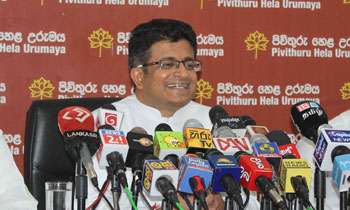 There was a counter plot to kill DIG Nalaka De Silva, who was accused of a plot to assassinate President Maithripala Sirisena and Gotabaya Rajapaksa, Pivithuru Hela Urumaya (PHU) leader and MP Udaya Gammanpila claimed today.

Addressing a news briefing, he said the best option available for the conspirators was assassination of DIG De Silva, so that he would then be silent forever with the secrets he possessed.

“We have evidence in the past in relation to cases where prominent people were arrested and remanded irrespective of their offices or social standings when they were accused of such plots.

“When the Government received a false information that Vasudeva Nanayakkara was involved in the insurrection in 1971, he was arrested and remanded despite of being a MP in the then Government,” Gammanpila said.

“Soon after hearing the attempted coup of 1962, the Government arrested every suspect including several DIGs and Army Colonels,” he said.

“An attempt to assassinate the President is not a mere homicide attempt. It is against the State. In such a background, it is questionable as to why the incumbent Government behaves in a strange manner with regard to DIG Silva,” he added. (Sheain Fernandopulle)