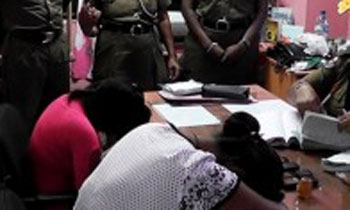 Four women and two men were arrested on charges of having run a brothel under the guise of a massage parlour in Kollupitiya last night, Police said.

They said the raid was conducted by the Kollupitiya police after obtaining a search warrant from courts.
Four sex workers, a manager and another person were among the arrested.