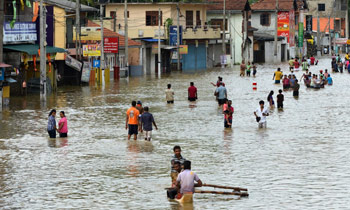 The death toll from the landslides and floods has risen to 208 with 92 still missing, the Disaster Management Centre (DMC) said today.

Some 677,241, people from 175,516 families were among those affected with about 30 temproray camps which had sheltered the displaced people were closed while 321 were still active as of yesterday.

The floods and landslides had destroyed 1,735 houses and damaged 9,432 while 146 schools were also damaged and 25,000 children have been left without their school books and stationery.

The Meteorology Department said showers or thundershowers were expected in the South Western Parts of the country while rains exceeding 100 mm were expected in Colombo, Kalutara, Gampaha, Ratnapura, Kurunegala and Kegalle Districts. (Yohan Perera)