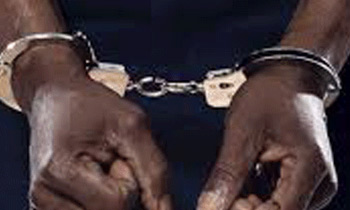 Five suspects were arrested by the Police yesterday for several offenses including the assault of a group of Coast Guards and damaging a police checkpoint at Point Pedro.

Police said the suspects were initially arrested following a tip off for illegally clearing a mangrove forest in Manalkadu, Point Pedro. The suspects were arrested along with several knives, a cab and a motor cycle.

Further investigation revealed the suspects were also wanted for damaging a police checkpoint at Kate Junction in Point Pedro on July 9.

Police said the suspects had also assaulted a group of Coast Guards attached to the Point Pedro naval branch and had obstructed the officers from carrying out their duties on July 21.

The suspects between the ages of 20 – 37 were identified as residents of Karaweddi, Warani and were to be produced before the Point Pedro Magistrate Court.(DS)