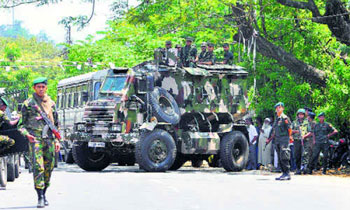 Four more suspects including an ex-soldier had been taken into custody by the Terrorist Investigation Division (TID) yesterday in connection with the recent violence that occurred in Kandy, police said.

They were arrested on Friday, Saturday and Sunday following an investigation conducted based on CCTV footages and other collected evidence.

According to police, suspect Prasanna Abeywardhane (40), a resident of Gonawala, Rajawella was arrested on March 30 for damaging shops and religious places in the Digana area. The suspect was identified as a labourer and was remanded until today (2) after being produced at theTeldeniya Magistrate’s Court.

The second suspect Sudilinaragedara Shantha Priyantha (30) who was a resident of Kahaulla, Katugastota was arrested by the TID officers on March 31. The suspect has been identified as a mechanic and was arrested for damaging religious places and shops in Madawala, Katugastota and remanded till April 10 after being produced at the Kandy Magistrate’s Court.

Meanwhile, suspect Dissanayake Mudiyanselage Sampath Sooriyabandara (37) a resident of Mullegama, Ambatenna was arrested yesterday (01) and was to be produced before the Galagedara Magistrate’s Court. The police said that the suspect was a labourer, was arrested in connection with setting fire to shops in Ambatenna and damaging religious places.

Former soldier Herat Mudiyanselage Piyatissa (46) was arrested yesterday for damaging shops and religious places in Poojapitiya. The suspect was a resident of Kaluwana, Ambatenna and he was also to be produced before the Galagedara Magistrate’s Court.

Meanwhile, police said that another team attached to the TID had been sent to Kandy to arrest several suspects who were identified in the investigations.

A recently – elected SLPP member of the Kundasale Pradeshiya Sabha was also arrested by the TID on March 28 for causing damages to businesses and places of religious worship at Digana, Kandy.

According to police, a total of 332 suspects had been arrested over the Kandy violence and among them 127 suspects are yet in remand custody. (Thilanka Kanakarathna)