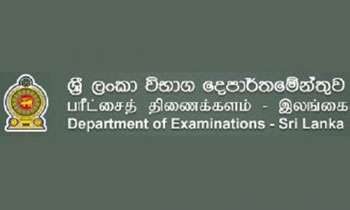 The Examinations Department had decided to assign ex-military and National Cadet Corps officers as exam invigilators for the GCE Advanced Level (A/L) examination to be held this August, the Daily Mirror learned.

When contacted, Commissioner General of Examinations Sanath Pujitha confirmed that it had adopted a ‘resource pool’ for examination duties and which includes retired military and Cadet Corps officers.

He said that anyone who completed the required qualification could enrol with the department’s resource pool for examination duties.

Mr Pujitha said that the decision had taken as a measure to curb examination frauds and to prevent any interruption to candidates during examinations.

He said that the newly adopted resource pool would undertake all future national examination duties and would receive an allowance from the department for their duties.

However, the department’s decision to involve retired military and Cadet Corps officers in the national examinations supervision had been strongly criticised by the school teachers and Principals.

He said the candidates would lose the opportunity to sit national exams with free mind if ex-military and Cadet Corps officers were used as invigilators.