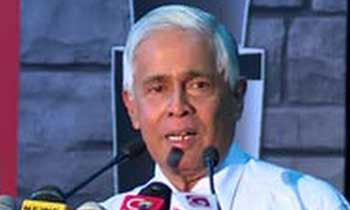 Former Chief Justice Sarath N. Silva today told the Supreme Court that the Attorney General was guilty of misleading Parliament through his opinion on the amendments introduced to the Provincial Councils Amendment Bill during the committee stage of its passage.

Making submissions as a citizen of the country in support of his fundamental rights application in the Supreme Court, he said he was not challenging the Speaker’s endorsement but that of the Attorney General’s opinion.

He claimed that it had been done in secrecy and that the AG was guilty of misleading Parliament.

Mr. Silva was making his submissions to support the leave to proceed with his FR application before the SC Bench comprising Chief Justice Priyasath Dep, Justices B.P. Aluvihara and Nalin Perera.

He said the Bill should have been passed and endorsed according to the Constitution and Parliament Standing Orders of the Parliament and as such this particular Bill had not been duly passed.

Additional Solicitor General (ASG) Sanjay Rajaratnam appearing for the Attorney General raised three preliminary objections on the maintainability of Sarath N. Silva’s FR petition on the grounds of suppression of material facts, no jurisdiction and the Parliamentary Powers and Privileges Act.

He pointed out that the petition did not mention in the threshold caption under which article he was attending Court. He said if it was a FR petition he should seek administrative and executive relief but in his petition he was seeking a declaration from the Court that the Speaker was not empowered by law to certify this Bill, which was passed at the 2nd Reading by Parliament and that the Speaker was prevented by law from endorsing a certificate on such an amended Bill as having been duly passed in Parliament.

The ASG said the petitioner was challenging the validity of the certification by the Speaker and the legislative process.

Mr. Sumanthiran in his submissions said the Supreme Court has no jurisdiction to hear or issue a determination on the said application.

He said this application could not be entertained as it was matter to do with Parliament where there was the parliamentary powers and privileges Act and cited and judgment delivered by a three-judge Bench one of whom was the then Chief Justice Sarath N. Silva.

In the judgment delivered on “Monetary Law (Amendment) Act and Inland Revenue (Special Provisions) Bill, Mr. Sumanthiran said Citizen Silva in this petition, who was the then Chief Justice pronounced that the petitioners were bound by the preclusive Clause and could not invoke the jurisdiction of this Court in respect of the validity of the Acts of Parliament and that the petitioners were seeking to indirectly achieve the result by challenging the Bills which preceded the respective Acts of Parliament.

Mr. Sumanthiran said former Chief Justice had ruled that therefore the petitioners could not circumvent the preclusive Clause as contained in Article 80(3) in respect of the Acts of Parliament by seeking to challenge the validity of the provisions of the Bill which preceded those Acts of Parliament.

Court fixed for October 19 the hearing of further submissions by the intervenient petitioners.

The former CJ had named the Attorney General Jayantha Jayasuriya PC, Parliament Speaker Karu Jayasuriya and the Chairman and members of the Elections Commission as respondents charging that at the Committee Stage of enacting the Bill all the operative Clauses of the published Bill passed at the Second Reading of the Bill were deleted and an entirely new set of provisions had been introduced.

“It appears that this is a total abuse of the legislative process and a negation of the Rule of Law,” the petitioner points out.

The former CJ claims that the AG conveniently washed his hands off from the proceedings at the Committee Stage and passed his responsibility to the Speaker who presided as the Chairman of the Committee.

The petitioner incriminated the Speaker of Parliament that the Bill published in the gazette and placed on Order Paper of the Parliament and passed by Parliament at the Second Reading was mutilated by the deletion of all the operative Clauses at Committee Stage and with copious additions and substantial amendments to the Principal Enactment. (S.S.Selvanayagam)