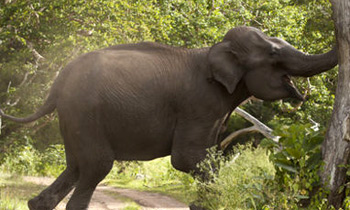 The Department of Wildlife Conservation is investigating the shooting of a she elephant by a policeman at Galgamuwa in Habarana last week.

Sources said the mother was guarding her baby, which had been run over by the Colombo- Trincomalee bus at Galwanguwa on the Habarana-Trincomalee Main Road on May 28.

Some police officers and Wild Life Department officials who had arrived at the scene attempted to chase the mother.

The Minneriya Park Warden said the elephant had tried to attack the Wildlife officials and some civilians when a police officer attached to the Habarana Police Station shot the elephant.(Darshana Sanjeewa)