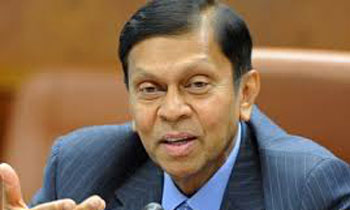 Former Central Bank Governor Ajith Nivard Cabraal, who served in office during the previous rule, said yesterday, the economy had been managed ‘very badly’ during the last couple of years even according to statistics published after the new government assumed office.

Issuing a statement, he said the country was now on the brink of a massive economic catastrophe.

“In fact, just last week, Bloomberg listed Sri Lanka as a high investment risk country, and placed it at 67 out of 80 countries (20 slots behind Greece!), in their “Global Risk Briefing”. In other related developments, the rankings of the country suffered embarrassing setbacks in the “Doing Business Index” and the “Corruption Perception Index” as well,” he said .

Some leading members of the present “Yahapalana” government have recently claimed that they took over an economy that was in the Intensive Care Unit (ICU) on 8th January 2015, and that during the past 2 years, they have brought the economy to a stable level. In that regard, the following basic analysis of Sri Lanka’s macro- fundamentals (as per Central Bank and other data published after January 2015) is set out, so that all Sri Lankans could see for themselves, the true position about our economy, then and now.

Citing statistics, he said the economic growth for the five years from 2010 to 2014, was at an average rate of 6.8% and the investment outlook was steady and robust. On July 29, 2014, the IMF stated: “Sri Lanka’s economic growth has been one of the fastest among Asia’s developing economies in recent years”.

“Investment is slack, and new jobs are not being created. Agriculture production and Telecom services are at risk,” he said quoting statistics.

He also said, “The desperate claims that the economy is robust by a few Ministers who have lost their credibility, is hardly likely to change the gloomy business sentiment or the pathetic situation. Accordingly, is now time for those who are responsible for the economy to cease uttering blatant falsehoods, desist from trotting out lame excuses, and stop accusing the previous administration for their own mismanagement and incapabilities. At the same time, the present administration must immediately acknowledge the gravity of the situation and take the necessary remedial measures to avoid the impending disaster. Unless that happens, this self-made “perfect storm” that has been thrust upon our once-robust economy by the present administration will engulf our country with disastrous consequences.”