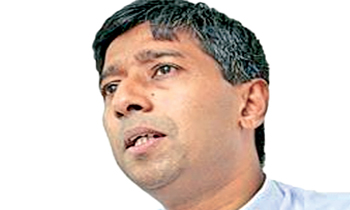 The Court of Appeal Bench comprising Justices L.T.B. Dehideniya (President/CA) and A.L.S. Gooneratne yesterday fixed December 6 to deliver its ruling on GMOA President Anuruddha Padeniya who is facing charges of contempt of court .

The charge sheet was read to the respondent in court and notice issued directing him to show cause as to why he should not be punished for the offence. He pleaded not guilty.

The National Movement for Social Justice (NMS) Convener Prof. Sarath Wijesuriya and the Puravesi Balaya Convener Gamini Viyangoda filed the petition complaining that Dr. Padeniya had committed the offence of contempt of court.

The petitioners state that the Court of Appeal delivered its judgment on January 31, 2017 and issued a writ of mandamus directing the Sri Lanka Medical Council (SLMC) to provisionally register SAITM's MBBS graduates as medical practitioners and issued a writ of prohibition preventing it from refusing to do so.

The petitioners state that the GMOA on April 7 had organized a protest march and a rally at which the respondent delivered a speech and made deliberate, malicious and contemptuous statements in relation to the court process, judgment and the conduct of the Judges and the Attorney General.

They state that at an interview, GMOA Secretary Nalinda Soysa said the President should exercise his executive powers to quash the Court of Appeal ruling and that the respondent had obstructed the due administration of justice coercing other authorities to apply pressure on the Court.

They are seeking Court to deal with the respondent and punish him for committing the offense of contempt of court.  (S.S. Selvanayagam)