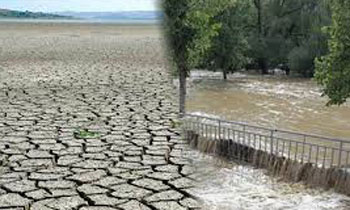 While some 600,000 people had been hit by the recent floods and landslides in the South, a total of 849,752 individuals belonging to 243,683 families in eight districts in the north and east had been affected by the severe drought condition across the country, the Disaster Management Centre census revealed yesterday.

The DMC situation report issued last evening showed the Northern Province as the most affected area with 452,907 people of 130,931 families affected by the drought.

According to the report the Eastern Province was the second most drought hit area with 200,451 individuals in 55,249 families being affected.

DMC Deputy Director (Early Warning) Mr. K.A.D.P.K.Kodippili told Daily Mirror that DMC is supplying drinking water to the affected areas and the affected people were compensated by the government.

Meanwhile, the DMC said 584,591 people belonging to 150,215 families in eleven districts has been affected by the recent floods, heavy rain and strong winds.

The DMC reported that 213 were killed and 154 injured by the inclement weather conditions.

Further the weather forecast for the next 36 hours from 6 pm yesterday issued by the Meteorological Department predicted showers in several districts.

“Showers will occur at several places in the Sabaragamuwa and Central provinces and in Kalutara district. Light showers can be expected in the Colombo, Gampaha, Galle, Matara, Puttalam and Kurunegala districts,” it said.

It also said fairly strong winds at times as much as about 50 kmph could be expected over the island except in the Northern Province. (Thilanka Kanakarathna)