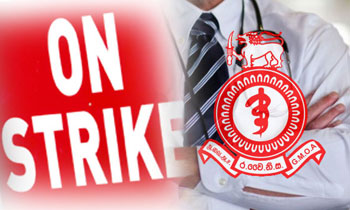 The GMOA today warned it would launch a district wise one-day token strike from tomorrow on a staggered basis against the recommendations by the Harsha De Silva-headed Presidential Committee on SAITM.

The GMOA states that the recommendations even contradict the government’s previous stance on the SAITM.

GMOA Secretary Haritha Aluthge said the committee was expected to submit its recommendations to the President calling for the setting up of an alternative authority undermining the Sri Lanka Medical Council (SLMC).

He told a news conference that the GMOA executive committee which convened this morning had decided to launch the district wise one-day token strike starting from tomorrow and if the government failed to provide a reasonable solution, a countrywide joint trade union action would be launched September 21.

Dr. Aluthge said the token strike would be launched today in Jaffna, Kilinochchi, Mannar, Mullaitivu, Trincomalee, Polonnaruwa, Batticaloa, Nuwara Eliya and Hambantota districts; in Vavuniya, Matale, Ampara, Badulla, Monaragala and Matara districts on the 13th; in Anuradhapura, Kurunegala, Kandy, Ratnapura and Galle on the 14th and in Puttalam, Gampaha, Kegalle, Colombo and Kalutara on the 15th.

He said the committee was planning to submit recommendations favouring SAITM including legalizing it contradicting the stance taken by the President.

Dr. Aluthge said GMOA would never allow the committee to legalise the SAITM, and that the committee had not even mentioned the issuance of a gazette notice to suspend student admission. (Ajith Siriwardana)