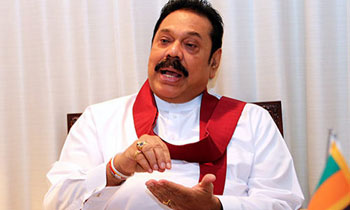 Former President and MP Mahinda Rajapaksa today said everyone should act with responsibility to maintain law and order in Digana and said both the President and the Prime Minister should take action in this regard.

Mr. Rajapaksa expressed these views in response to questions by journalists outside the Sri Sambodhi Viharaya in Colombo.

The former president arrived at the temple to pay his last respects to Ven. Daranagama Kusaladhamma Thera who passed away recently.

Mr. Rajapaksa said the demise of Ven. Kusaladhamma Thera and Ven. Bellanwila Wimalarathana Thera created a great void in the country and the Buddha sasana.

When asked about his opinion on the Digana incident where a tense situation prevailed yesterday, he said everyone should use their brains and act responsibly to maintain law and order.

“According to reports I received, police action had aggravated the situation when they took into custody a vehicle that came to a funeral. I’m not saying this is exactly what has happened. There are different versions of the story,” he said.