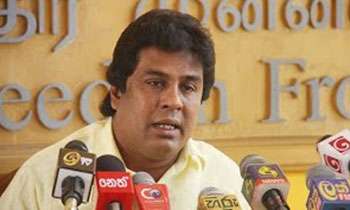 Former in charge of the Terrorist Investigation Division (TID) DIG Nalaka de Silva, against whom allegations had been levelled over his alleged plot to assassinate President Maithripala Sirisena and former Defence Secretary Gotabaya Rajapaksa, had connections with the LTTE, the National Freedom Front charged today.

Addressing a news briefing, NFF National Organizer Jayantha Samaraweera said they had evidence to prove that DIG Silva had had close relationships with LTTE personnel in Chavakachcheri among whom some of them still have contacts with the DIG.

“Namal Kumara who is a reliable spy attached to the Sri Lanka Police recently leaked a phone conversation, which was reported to have had with DIG Nalaka Silva, where he has revealed facts related to a conspiracy to assassinate Maithripala Sirisena and Gotabaya Rajapaksa,” Samaraweera said.

“When the evidence is clear, we can’t fathom as to why the Governmnt is not active to take any legal action against Nalaka Silva,” he added. (Sheain Fernandopulle)